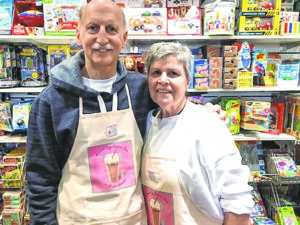 This year marks a milestone year for Eileen Caplin Wysel and her husband, Ronnie, owners of Bobb Howard’s General Store in New Hyde Park, its 75th anniversary to be exact. The lingering pandemic derailed the planned celebration that always takes place in October and draws hundreds for candy and sweet memories, marked with free egg creams.

“We get hundreds of people at our functions,” Eileen Caplin Wysel said. “We did not want to be the one place that anyone got sick from.”

The COVID numbers have been unpredictable over the past couple of weeks, some rising, some leveling.

“We’re hoping for a ‘75-years-plus’ celebration at a later date,” Wysel said.

Customers have not slowed their patronage. The general store has been a welcome escape from the realities of uncertain times.

“We’re down the block from the medical community and frequently see people from there who are having a hard time, even regular people who are having a tough day,” Wysel said. “If we can put a smile on their face for a nickel piece of bubble gum, it’s been a great day.”

Bobb Howard’s General Store, historically the office space for the adjoining auto repair shop, has evolved over the past decades.

“It was my idea to bring an old-time candy shop to the garage,” Wysel said. “Since we were kids, my parents always sold candy in the office repair shop; we had things like cigarettes, newspapers and lotto.”

Her father developed emphysema after smoking for many years.

“In 1996, before he passed away, I had gotten rid of all of the cigarettes in the shop and slowly started converting it over to exclusively a candy store,” Wysel said.

As expected, there must be one thing that everyone always says when they walk through the doors at Bobb Howard’s.

“‘Wow, I haven’t seen this since I was a kid,’ and we hear it multiple times a day,” Wysel said. “We had someone walk through the door the other day and she wasn’t here for five seconds, before she looked around and burst into tears. I said, ‘Oh my god, are you ok?’ and she said, ‘You have chocolate grahams that I have been searching for my whole life. There are lots out there, but these are the ones I had when I was a kid.’”

With old-time candy, some of the favorites that we still love today date back to the early 1900s, like Bit-O-Honey, Dum Dums, Good and Plenty, gumdrops, jelly beans, PEZ, Raisinets, rock candy, Sixlets, Slo Pokes, Tootsie Rolls and Twizzlers. And all of these can still be found at Bobb Howard’s General Store.

“Double Bubble, the original 1928 flavor bubble gum, has been the one candy that has been on our shelves since the beginning, as long as I can remember,” Wysel said. “But red shoestring licorice is our best-seller; everyone loves it.”

Bobb Howard’s is not just locally known. They get orders from all over the country.

“We’re working on the second, third and some fourth generation’s vehicles, believe it or not,” Wysel said. “It’s the same with the candy store. People say, ‘I used to come here when I was a kid” and now they bring their kids in.”

The Wysel’s give back to the community generously.

“Whatever change you put into the collection box in the back of the store, Bobb Howard’s matches that; we buy hats and gloves for needy children,” Wysel said. “We also have a scholarship in both of my parents’ names in the local school district; it’s not for the smartest—it’s for the two students that try their best in each year’s graduating class, since 1997.”

The Wysels are second generation, still running the store. Their own kids, nieces and nephews are the “candy tasters and toy testers.”

“They all want that job here,” Wysel joked. “We’re lucky to be here doing what we do too; not everyone can say they love their job and we do. We’re very blessed and grateful that my parents gave us this opportunity.”

“We’re known for our honesty and integrity,” Wysel said. “We always want to help.”

Bobb Howard’s General Store is located at 581 Lakeville Rd., in New Hyde Park, just north of Jericho Turnpike. The store is open Monday through Saturday from 7:30 a.m. to 5 p.m. Visit www.bobbhowardsgeneralstore.com to learn more about old-time candies and the history of the general store.

Also, check out www.longislandweekly.com/candyreview to see Anton’s recent review of some of the fun and memorable candies found at Bobb Howard’s.