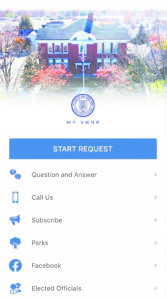 The Village of New Hyde Park has now gone mobile with the launch of its brand new app that will allow village residents to be up to speed on everything that’s happening around town.

“We’re launching an app that we’d like all residents to install on their phones,” Deputy Mayor Donna Squicciarino said at recent board meeting that was held virtually. “When you look at it at first it kind of mirrors the [village] website, but it is a great communication tool for reporting things, sharing things, notifications and all the information that is going on in the village.”

The app, Squicciarino said, has some great functionally where residents can even create alerts.

“Let’s just say you’re out on the street and you see a pothole,” she explained. “You can take a picture of it and send it through the app. Every movement will be tracked by the board and we can see the responses and whether or not a response has been made. It should be a  real useful tool for helping us to create efficiencies and being able to log and monitor things and make sure that issues are resolved.”

Mayor Lawrence Montreuil said that he’s excited about the launch of the new app.

“I think it’s a really nice app,” he said. “Essentially what it is, is a 311 system. It’s a way for residents to see and report some discrepancies and what it does, it creates a ticket and routes it to the appropriate village department to resolve it. We’ll be able to monitor the queues in each department and track the response time and so forth. I’m really excited to get that rolled out and into everyone’s hands so they can easily report whatever discrepancies they see. I think it’s a really positive measure.”

Residents and visitors can download the My VNHP app from the Apple and Google Play stores today.