While out on a summer hike, after months of COVID-19 restrictions, scouts and leaders from Troop 298 in New Hyde Park were able to put their skills and training to use. Last month, Troop 298 was about three and a half hours into
their weekend backpacking trek in Harriman State Park and was taking a short break on the Appalachian Trail by the location known as the“Lemon Squeeze.” While taking the break, a hiker had slipped and fell off a seven foot rock ledge and landed on a trail and some rocks below, breaking his ankle. The troop immediately went into first aid/rescue mode. The troop assessed the situation, called 911, stabilized and comforted the hiker, wrapped and splinted the ankle and leg, took down necessary information for EMTs and park rangers, and cleared a path so that the injured hiker could be carried out to emergency transportation. The troop even assisted park rangers and EMTs in lowering and carrying the hiker in a rescue basket to safety.

The park rangers, EMTs, as well as the hiker, were amazed and commented on how skilled and prepared the troop was for the rescue. Mr. Rainer Burger noted the troop lives by the Scout motto “Be Prepared.” The troop had all the necessary first aid, gear, rope, and most importantly skills. The heroic Scouts and leaders were recognized for their bravery on Aug. 10 with proclamations and citations from New Hyde Park Mayor Larry Montreuil, the village board and Nassau County Legislator Officer Richard Nicolello.

The scouts that were part of the rescue included Life Scouts Daniel Corcoran, Maks Manoni, Daniel Sohl, Daniel Dore, Collin Lowey and Aaron Canese; Star Scout Michael Dore and 1st Class Scout Andrew Canese, Assistant Scoutmaster
Rainer Burger, who is also a village trustee, noted that he and all the Troop 298 Scout Leaders are proud of the scouts.

—Submitted by the Village of New Hyde Park 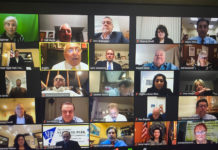 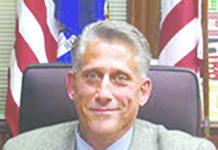