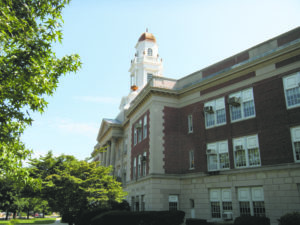 With a national debate going on about racially insensitive mascots and professional sports team names, the Sewanhaka School District was called out during a July 7 Board of Education meeting about Sewanhaka High School’s mascot, which is a Native American Indian.

“As a result of some community concern, the board of education and administration will be surveying each of the school mascots to gauge their appropriateness to the school and their community values,” Sewanhaka Central High School District Superintendent James Grossane said in a statement to Anton Media Group. “We will be sharing any updates on this matter at future board meetings.”

Three days before the board meeting, a Change.org petition was created to change the school’s mascot on July 4. As of publication, the petition has received 780 signatures.

“Sewanhaka High School can be considered a diverse school, but it is not a predominately Native American school. To have students dress up in feathers and different outfits that belong to Natives is disrespectful,” the petition said. “They do not understand the history behind these outfits and accessories. They most likely do not know much about Native history in general because Native history is not taught in school. Calling Indigenous people an Indian and making them mascots has a negative connotation behind it. Not only were there people killed off almost to extinction, but they have faced racism for almost their whole existence. It’s time for a change. People of color and allies must come together and stop this once and for all. We are all brothers and sisters. We should be paying each other respect. Humans are not a fictional character or an animal. They should not be a mascot to entertain people. Getting this mascot to be changed will bring us one step closer to allowing people to see the wrong doings in today’s society.”

On the petition were a lot of commenters who fully supported the change in mascot.

“For a school that’s extremely diverse and welcomes conversations about tough topics, this is something we need to talk about,” said one commenter. “It’s 2020 and we have long since known that our mascot name is offensive. We need to finally do something about it and change it to something that doesn’t allow/continue the disrespect of Native Americans.”

“I swear to God, I’ve been saying this for years,” said another. “They dressed up a white guy as our ‘mascot’ in a Native American headdress! This has gotta go.”

Now that it is the 21st Century, it seems that time really is a key proponent for change.

“Class of 1972 here,” one commenter said. “We didn’t know any better then. We should have. We know now. Change the team name. Change the fight songs. Honor the school name.”