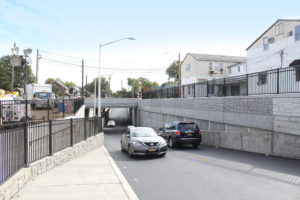 Six months ago, New Hyde Park’s Covert Avenue grade crossing was completely shutdown thanks to the third track project, which proved to be a difficult time for nearby residents who lived near the grade crossing. Last week, Covert Avenue was finally reopened, however, looking a little different than it did in the past.

The Covert Avenue grade crossing was one of eight street-level crossings along the Long Island Rail Road (LIRR) main line that was eliminated. Up next to be eliminated is the New Hyde Road and South 12th Street grade crossing in the village.

Over a single weekend in late August, crews from LIRR and 3TC, who are the contractors for the third track project, worked around the clock to successfully push the brand new 1,200 ton Covert Avenue bridge into place as well as the underpass structure for Covert Avenue. Workers moved the pre-constructed structure in increments, which were more than 50 feet, into position on the LIRR main line, after removing tracks and excavating down 25 feet in preparation. LIRR crews then rebuilt the tracks and reinstalled the supporting systems. 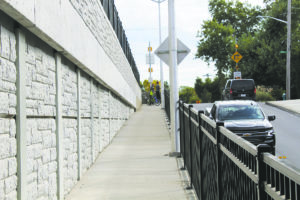 “This [past] weekend, Covert Avenue reopened exactly 180 days after it closed on April 15,” said Mayor of New Hyde Park Lawrence Montreuil in a letter to residents that was posted on the village’s website. “The crossing at Covert Avenue has been in existence for approximately 183 years. We are relieved of one of four at grade railroad crossings in New Hyde Park (including Covert Avenue on the Hempstead line). The elimination of the Covert Avenue/main line grade crossings will undoubtedly make the rail road crossing safer. It will reduce the train noise that residents have put up with for decades. The traffic should flow better on Covert Avenue [too].”

The Covert Avenue grade crossing is now a two-lane grade-separated underpass with a pedestrian sidewalk on the east side of the underpass. The reconstructed grade crossing has been designed in conjunction with the Village of New Hyde Park, will enhance safety and provide for a quieter and more livable community along the rail road. The former grade crossing has long posed a safety risk to drivers, pedestrians and commuters who ride the trains, contributed to noise and air pollution and caused lengthy commutes for both drivers and LIRR customers.

“We have endured a lot—for a project we did not ask for,” said Montreuil. “The people of New Hyde Park deserve credit and congratulations for this grade crossing elimination. Their tolerance of these pains, with dignity was a necessary collateral affect throughout the six-month gestation. Those people especially those living close to the rails were unwitting partners in this project. Yet they behaved with grace under duress.”

The Covert Avenue grade crossing elimination even had adverse affects in nearby Floral Park. The Village of Floral Park Board of Trustees passed traffic resolutions back in March to alleviate major traffic concerns that were expected to happen with the Covert Avenue shutdown. Cisney and Beverely avenues were transformed from a two-way street into a one-way street at the beginning of April. This past week, Cisney and Beverely avenues were returned back to two-way streets providing much more easier access for motorists to navigate around the village.