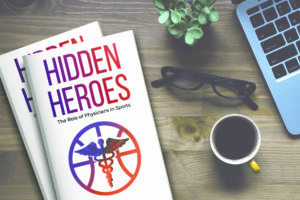 New Hyde Park resident Udit Dave was studying abroad in Sydney, Australia when his grandfather, who was a physician in India when he was growing up, unfortunately passed away. Even though something tragic happened in Dave’s life, he was able to turn that into a positive when he was inspired to write his very own book about physicians and the role they play in sports medicine.

“My grandfather was someone who I always had with me growing up and he was really my best friend,” said 21-year-old Dave, who is currently a senior at Georgetown University. “Waking up one day and hearing over the phone that I lost him was the toughest thing I have ever endured. To make things harder, while my entire family was in New York, I was across the world in Australia.”

Growing up, Dave’s grandfather always told him stories about medical mysteries he had helped solve or how he would treat patients for free. As Dave grew older and had some of his own experiences with studying biology and health care, he fell in love with medicine.

“I am actually going through the process of applying to medical schools right now and I would love to be a physician one day,” Dave said. “After I lost my grandfather, I turned to writing as an outlet. In fact, a majority of this book was written over a span of two weeks after he passed away because I basically locked myself in my room and just conducted interviews and wrote parts of the book. I had the idea for analyzing the role of medicine in sports because I grew up loving sports, and I’m a diehard Knicks, Jets and Yankees fan. I saw writing a book as being the perfect opportunity to combine my interest in both sports and medicine and to see how the two topics intersect.”

Hidden Heroes: The Role of Physicians in Sports, which is available now, looks at the way doctors help athletes bounce back from major injuries.

“My biggest goal in writing this book was to focus on the recovery processes athletes go through when they get hurt,” explained Dave. “Oftentimes, we hear about a superstar athlete going down with a major injury like an ACL tear, stepping out of the limelight for a few months, and then returning to the playing field at the same level or sometimes an even higher level of performance. Athletes deservedly get massive amounts of credit for the work that they put in to return to this elite position, but I wanted to focus in on the things doctors do that facilitate these recoveries.”

Through the book, readers will learn all about the intersections of sports and medicine, which is the ideal read for any sports fan and anyone who is interested in medicine. The book showcases the stories of superstars such as LeBron James, Kevin Durant, Kobe Bryant, Drew Brees, Adrian Peterson, Russell Westbrook, Peyton Manning, Giancarlo Stanton and more.

“Something I really love about this book is that most chapters have a piece of me in them,” said Dave. “I relay my experiences with watching these athletes perform and how important they are to me.”

It is safe to say that Dave encountered his fair share of challenges writing his book.

“The most difficult part about trying to learn about athletes’ treatments is the confidentiality agreement physicians have with their patients,” explained Dave. “These athletes are patients first, and doctors and patients have a sacred bond of trust. As a result, doctors are only allowed to reveal things about athletes they have treated that is either already public or that the athlete has already given them permission to share with the public and the press. This presented a unique challenge because I had to find a way to explain how an athlete recovered without violating their privacy.”

While writing his book, Dave had the chance to speak to some world-renowned physicians and some superstar pro athletes, and was featured on New York Sports and Beyond with Larry Hardesty on ESPN NY 98.7 while his book was listed as a No. 1 New Release in its first few weeks on Amazon.

“I am so humbled by all the support I have received from not only my family and friends, but from the larger community,” said Dave. “My publisher is currently aiming to put together a speaking tour because of the great feedback the book has received. I am pleasantly surprised by the impact this book has had, and I am so excited by the opportunity to have an outspoken voice in the New Hyde Park community and beyond.”

Hidden Heroes: The Role of Physicians in Sports is currently available on Amazon in paperback and Kindle format. Additionally, there are copies of the book available at Shelter Rock Public Library in Williston Park.