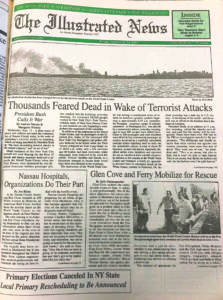 This week marks the 18th anniversary of the 9/11 terror attacks that changed the country forever. Back in 2001, the New Hyde Park Illustrated News, at the time covered New Hyde Park, Albertson, Garden City Park and the Willistons, had many articles about that fateful day throughout its Sept. 14 edition.

The main story that week was “Thousands Feared Dead in Wake of Terrorist Attacks,” which showed a photo of the destructive aftermath of the World Trade Center along the Manhattan skyline. The article gave readers a timeline of the events that happened that morning as well as President George W. Bush’s address to the nation.

Other articles on the front page that week were “Nassau Hospitals, Organizations Do Their Part” and “Glen Cove and Ferry Mobilize for Rescue.” The Nassau County American Red Cross in Mineola, along with various organizations, medical professionals and volunteers, did their best to help out. Nassau County hospitals also prepared for an influx of patients from Manhattan while it was urged by local officials for people to donate blood because of a shortage.

In Glen Cove, victims of the attacks were transported via a Fox Navigation high-speed ferry to Garvies Point Road for assistance. The ferry ride took 40 minutes to get from lower Manhattan to Glen Cove.

“We’ll go back and forth to Manhattan for as long as it takes,” said director of operations for Fox Navigation, Nilda Bracero.

Primary elections in New York State were also cancelled due to the attack.