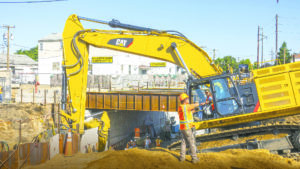 According to New Hyde Park Mayor Lawrence Montreuil, Covert Avenue is finally set to reopen on Wednesday, Oct. 9, after almost six months of being shut down due to the third track project that is going on within the village. That set date is one step closer to becoming a reality when 3TC and the Long Island Rail Road (LIRR) rolled in the brand new bridge, which weighs 1,200 tons, at the Covert Avenue grade crossing late last month.

Over a single weekend, crews from LIRR and 3TC worked around the clock to successfully push the new bridge into place as well as the underpass structure for Covert Avenue. Workers moved the pre-constructed structure in increments more than 50 feet into position on the LIRR main line, after removing tracks and excavating down 25 feet in preparation. LIRR crews then rebuilt the tracks and reinstalled the supporting systems.

“It’s a unique operation and now that we’ve done it a few times we’re probably going to become the experts on it,” said Mark Roche, who is the senior director of alternative project delivery for MTA Capital Construction, the agency leading the LIRR Expansion Project effort. “It’s quite nice to be at the forefront of these types of things.” 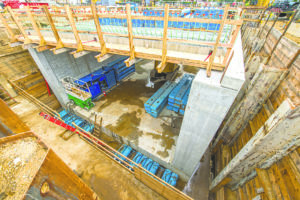 The new bridge and tunnel structure was built by construction crews over the last several months. When Covert Avenue reopens, there will be a two-lane, grade-separated underpass with a pedestrian sidewalk on the east side of the underpass. The reconstructed grade crossing, which was designed in conjunction with the Village of New Hyde Park, will enhance safety and provide for a quieter and more livable community along the rail road.

“The MTA and 3TC, quite honestly have been responsive to almost every issue that we’ve brought about,” said Tom Gannon, who is the superintendent of buildings with the Village of New Hyde Park. “I think it’s been going quite well. Notifications have gone out to our residents to keep everybody abreast of what’s going on.”

In the area of the demolished building at 115 New Hyde Park Rd., crews from 3TC will continue to work to install a new sanitary line and storm water retention system. Second Avenue, between Herkomer Street and New Hyde Park Road, is closed and will reopen approximately in Summer 2020 when the New Hyde Park grade crossing elimination is complete. Additionally, as agreed to with representatives from the villages, 3TC will provide a one-for-one replacement, inside the footprint of 115 New Hyde Park Rd. for the on-street parking spaces impacted by the construction. 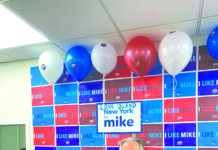 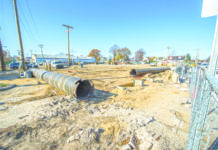