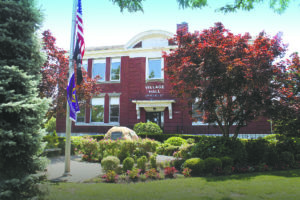 She was the first woman to ever be elected to the Village of New Hyde Park’s Board of Trustees and was known as a force of nature by many who knew her. Sadly, village staple Florence Lisanti passed away at the age of 91 on June 26.

“My mom was an inspiration because she taught us so many lessons,” said her daughter Geri Lisanti-Levy. “I grew up thinking, ‘wow, I live with a really powerful woman.’ She was short in stature, but she was powerful in spirit and she took that powerful spirit and it just gave her so much joy to give back to the community.” 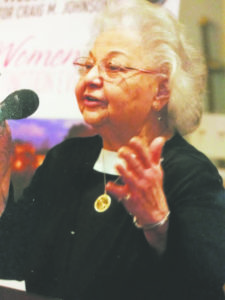 That powerful spirit that Lisanti had within her wasn’t just noticed by her daughter, but also by local politicians like Presiding Officer of the Nassau County Legislature Richard Nicolello and village trustee Richard Pallisco, who told Lisanti-Levy that her mom did so much for the village out of love.

“It wasn’t work to her,” said Lisanti-Levy. “It was her pleasure to give to people and she did it without ego too.”

Lisanti was born in Crown Heights, Brooklyn on Nov. 4, 1927, and spent her young adult years in Queens Village. She devoted decades to the New Hyde Park community, where her years of service began as president of the PTA at Hillside Grade School, New Hyde Park Memorial High School and the Nassau County PTA Council. Eventually, all of those years of service made Lisanti a recipient of their Lifetime Achievement Award.

Lisanti was instrumental in beginning the village’s annual Street Fair, which began in 1995, held on Jericho Turnpike every year. In her second term as village trustee, she served as deputy mayor.

“One of my favorite anecdotes about my mom was when she started the street fair,” explained Lisanti-Levy. “She went to one of her trustee/mayor meetings and said that lots of communities have street fairs and that it would be good for New Hyde Park and for the merchants on Jericho Turnpike [to have their own].”

When Lisanti was told that they couldn’t close down Jericho Turnpike because it was a state road, Lisanti seemed unfazed.

“She really loved this phrase that I guess is from World War II, but she used to say ‘damn the torpedoes; full speed ahead,” said Lisanti-Levy. “She was just a person that people could not say no to because they knew where she was coming from and how much she cared.”

In her final role in local politics, she enjoyed being the town historian, receiving citations of appreciation for her service and dedication, and was diligent in preserving the history of New Hyde Park through historical photos, videos and clippings that are still in village hall and the New Hyde Park Museum today. To each of these roles, Lisanti brought energy, innovation and commitment to the common good of her village that she loved so much.

“If I would say to her, ‘you know mom, you give so much to the community’ and she was so altruistic about it and would say ‘No. I get more from them by giving to them’,” said Lisanti-Levy. “She really was a force of nature. That’s what one of my girlfriends in junior high used to call her.”

Lisanti’s term as president of the village’s chamber of commerce was so appreciated that the chamber named their award for Outstanding Citizenship after her. Other honors that Lisanti received included North Hempstead Woman of the Year in 2000 and the 7th Senatorial District Woman of Distinction in 2010. Lisanti was also active in board of elections and various organizations such as noise abatement for low flying airplanes and the conservation of water to name just a few.

“Florence loved New Hyde Park and worked very hard to always make it a great place to live,” said Mayor Lawrence Montreuil. “She was actively involved in running the village and could often be found at village hall lending a sympathetic ear to her neighbor’s concerns. Florence researched the origins of New Hyde Park and enlightened so many of us on how this village on the plains came to be. She helped us develop a greater sense of pride in our town so we would take better care of it. Florence was a loyal and long-time resident, dedicated trustee and kind friend to us all. The thoughts and prayers from all of us, past and present from the village, are with Florence’s family and friends.”

In addition to her civic roles, she was a caring wife, mother and grandmother, who never failed to encourage her family to grow and pursue their work to the best of their abilities. Lisanti is survived by her three daughters and their husbands: Diane Lisanti, Geri Lisanti-Levy and Richard Levy, Laura and Jeff Yohe; and her grandchildren, Joshua and Andrea Yohe and Alessandra and Paul Levy. Lisanti is preceded in death by her husband of 42 years, Gerald Lisanti.

In lieu of flowers, donations to the Alzheimer’s Association can be made at www.alz.org.