A house fire that ripped through and destroyed a home on North 12th Street in New Hyde Park last week has claimed the lives of 68-year-old New Hyde Park resident Maria Karpinski and 4-year-old Brooke Schillizzi of Massapequa Park.

The fire started at around 3 a.m. when the New Hyde Park Fire Department, who were assisted by six other local fire departments, responded to the call, which consisted of 11 trucks and more than 200 firefighters, to fight the burning inferno.

According to the Nassau County Police Department, there were five occupants residing inside the home at the time of the fire. Two of the occupants were uninjured and managed to make it out unscathed. During the fire, a 10-year-old boy who was staying at the residence jumped out of the second story window, onto a car and ran across the street to neighbors for help. He was listed in stable condition when he was taken to the hospital. Karpinski and Schillizzi suffered injuries such as smoke inhalation and burns of varying degrees. 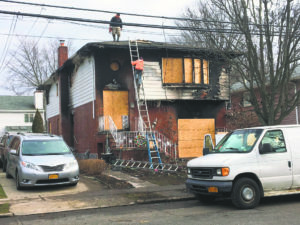 “The Village of New Hyde Park is deeply saddened at the tragic loss of life and property that occurred in a house fire on North 12th Street in our village,” said New Hyde Park Mayor Lawrence Montreuil. “Our thoughts and prayers are with the family of those who have lost so much. We sincerely appreciate the heroic efforts by the volunteers of the New Hyde Park Fire Department in responding so quickly for their courage and professionalism.”

In the days following the fire, members of the New Hyde Park Fire Department returned to the scene to lay down a wreath to honor Karpinski and Schillizzi.

According to the Nassau County Fire Marshal’s office, an unattended candle sparked the blaze. There were no working smoke detectors inside of the home.