When I was in high school, my friend group resembled the United Nations. From them, I learned about the importance of Greek school, the deliciousness of lumpia (Filipino egg rolls) and why Muslim girls wear hijabs. The diversity of my friends was something I valued, but maybe took a bit for granted.

When I went away to college in the south, I realized just how diverse Nassau County was. Unlike other parts of the country, Nassau County was a place that people from all over the world called home and where they could worship and live freely.

That ideal has been threatened recently, with numerous incidents of racially charged graffiti popping up across Nassau County, leaving people uneasy and nervous. Suddenly, their neighborhood, be it Garden City or Mineola, or even their high school or college, is a bit more hostile of an environment. Certain groups of people have reported being scared to leave their homes, go to their places of worship or draw attention to themselves.

The unfortunate truth is, racism in Nassau County is no new thing. While there may have been a more recent visible uptick, it’s been going on in the background, many times unnoticed and unreported, for years. The perpetrators range from administrators and officials who keep school districts and neighborhoods segregated, to the random stranger who told my friend he should “go back to his country.”

The squeaky wheel gets the grease and while it’s disheartening to hear of yet another incident of racial bias, I’d like to think those hateful sentiments are not shared by the majority of residents. Nassau County is unique in that you can get a taste of what the rest of the whole world is like, without ever stepping on a plane. Let’s not take that for granted. Let’s vocally oppose the vile acts of uneducated cowards and learn more about people that aren’t like us. Whether or not you agree with them, at the very least we can unite under the common belief that we all want to enjoy the freedoms and safety this country promises us.

Editorial: Election Day Should Be A Holiday 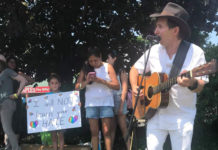